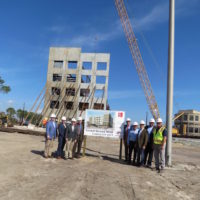 A groundbreaking ceremony for the new Grand Strand Regional Medical Center Medical Office Building (MOB) located in Myrtle Beach, SC was held on February 6, 2019. Concord is engaged as Owner’s Representative for HCP, Inc., owner of the 94,500 square foot MOB. The facility, which is scheduled to be completed in November 2019, will be the first 5-story “tilt-up” building to be erected in South Carolina with each panel weighing approximately 160,000 pounds.

HCA Physician Services Group (PSG) will lease approximately 64,000 square feet of the MOB and will take occupancy in December 2019.